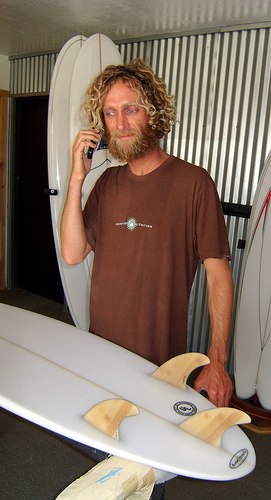 Chances are that unless you’ve had your head in the sand, or live in the Isles of Scilly, you’ll be aware of the untimely death of surfing legend Andy Irons in November last year.

This week a toxicology report was released showing that there were various class A drugs in his system when he died.

It should never be forgotten what a great surfer Andy Irons was…however at the time of his death he was competing at the top level of surfing on World Tour events, and this begs the question:

“How could a top surfer take so many drugs, and the ASP organizers and sponsors not know?”

Aside from the moral issues about taking illegal drugs, the reason Andy Irons took the drugs he did may have had nothing at all to do with enhancing his chances of winning surf competitions. However some of the drugs found in his system were technically performance enhancing…increasing alertness, confidence, concentration and so on.

Is it OK to take drugs, or is it ‘cheating’?

The ASP has a ‘zero tolerance’ policy for performance enhancing drugs. In 2005 Neco Padaratz was banned for using anabolic steroids after failing a drug test administered by the French Drug Testing authorities during the 2004 World Championship.

Fair enough…why should surfing treat its competitors any differently to how the running, cycling or swimming association treat theirs.

The fact that Andy Irons had so many drugs in his system makes you wonder…does the current drug testing system in surfing actually work?

If the powers that be are unable to successfully monitor the drug use of the top 30-40 competitors, it could result in questions being raised about the credibility of surfing as a competitive professional sport.

Where should sponsors stand on drugs?

There’s evidently a lot of ‘politics’ in world surfing like any major sport. You can imagine that sponsors would all love their sponsored surfers to be drug-free and win lots of titles – that’s the corporate dream – but on the flipside could they possibly be a little concerned about strict drug testing…after all, how does it impact on a brand if one of the sponsored team members fails a drugs test?

That’s more likely to happen if there are stricter random drug tests…a failed drug test could be bad news for the surfer and a sponsor.

I’d imagine no brand would want to admit that they’re sponsoring someone that could damage their image, but if some truth about drug taking came out, it could do exactly that.

“It’s not hard to imagine that sometimes it could be in a sponsor’s interest to turn a blind eye if a team rider is known to be taking drugs.”

However, strict random drug testing would put the focus back on honest competitive surfing, and that could be a good thing in the long-term.

It would discourage people competing from taking drugs, set a good example for kids coming through the ranks, and draw a clear line in the sand about what is acceptable and what is not

Isn’t all this ‘Just Say No’ sh*t, spoiling the surf party?

Surfing has an association with drugs that it seems to struggle to shake off.

If someone wants to take hard drugs and surf, then of course that’s up to them – but we need to say that its not OK on the WQS and World Tour.

“If you want to be a party animal/ rock star and get wasted all the time, that’s fine. Learn the guitar and turn it up to 11. Just accept your going to have to be a free surfer.”

Whether it’s recreational or performance enhancing, to my mind it’s a real shame if surfing doesn’t impose more random testing.

Surely now is the time for the world of surfing to get its act in gear and implement strict random drug testing in order to get the respect professional surfing wants…and deserves.

What do you think?

Is the ASP weak for not imposing regular random drug tests on surfers?

Is it OK to take loads of ‘class A’ drugs and compete in professional surfing?

Let us know in the comments below