The Nike 6.0 night surf attracted a huge crowd tonight on Fistral beach for the finals. The big news was Russell Winter’s victory and Ben Skinner – who managed to land a fantastic air on a longboard during the finals!

The organisation and planning of the event by Nike was pretty impressive. A large stage was built for bands at North Fistral, and a big screen was put up so folks could watch the surfing. 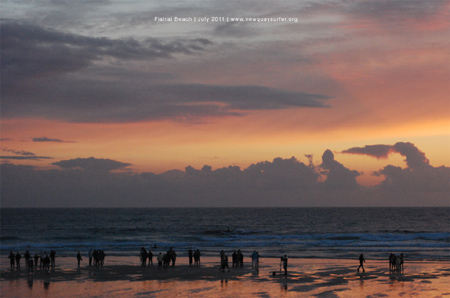 There was some pretty entertaining commentary from Sam Lamiroy and Lee Bartlett. Also, I don’t think I have seen so many video cameras put to use for a surf event at Fistral…any post event footage should be pretty slick.

Whatever Nike did as their marketing for this event, it worked. It’d be fair to say that it was probably the largest crowd watching a surfing final most people had seen in the UK. From the womens final, through to the longboard event, cash for tricks and mens open final the crowds kept coming. The prize purse for surfers was also quite impressive too…You have to hand it to them, Nike certainly know how to do a surf comp in style…maybe they should sponsor Boardmasters next year.

The winners of the surf competition were as follows:

Check out the gallery of photos below ( click on images for larger version).